The town of Grand Falls, New Brunswick, is uniquely located on three different flowing bodies of water with over 10 kilometers of channel and cliffs as high as 60 meters in elevation. The bodies of water, the Saint John River, the Little River, and the Falls Brook, are causing instability problems for town infrastructure and public safety as they erode deeply into the terrain and alter local topography. While this study, the Grand Falls Erosion Assessment Project, identified that the biggest contributors to erosion in the town as the flow of the rivers, the erosion problem is significantly exacerbated by removal of shoreline vegetation, poor storm runoff and inappropriate filling.

The project outlines five goals to assist the town of Grand Falls: 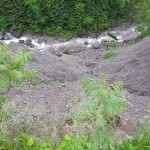 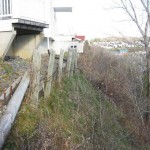 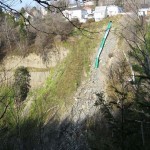 The Grand Falls Erosion Project is one of six similar projects in New Brunswick with the general aim of developing measures to mitigate the effects of climate change. To accomplish its goal, the project identified instabilities and prioritized areas based on the comparative level of risk. From there, the municipality identified infrastructure at risk and sought possible adaptation measures on an individual basis. The two final and most important steps in the process included identifying contributing factors to the erosion problem and implementing management solutions to mitigate future damage.

Researchers used a combination of desktop research, fieldwork, and analysis reporting to reach accurate findings. During the initial desktop research, a computer generated Geographical Information System (GIS) compared past and present contours and slope steepness, and mapped historical run-off. The fieldwork following the GIS identified and documented the current state of eroding areas. Lastly, the analysis of both desktop and field research produced a list of contributing factors, at-risk infrastructure, storm water run-off solutions, and recommendations for future planning.

A combination of man-made and natural forces has contributed to the erosion issue in Grand Falls. The problem at its core is the gradual undercutting at the toe of the banks by river flow. However, this process is often worsened by population interferences like improper storm sewer and surface water outfalls, vegetation removal, and filling over slopes. Furthermore, the continual development of the watershed region as a whole has increased the stress on the river system, exacerbating the problem even more. Natural forces are also at play with the erosion, as records indicate that both the amount and the intensity of precipitation has been on a gradual increase since the 1970’s.

In order to best combat the erosion issue, Grand Falls merged its knowledge about each specific risk area and the most important contributing factor for each, allowing the town to tailor an effective approach. For example, an area where bank erosion is being caused by river undercutting, riprap can be placed to displace the erosion; or, in areas where storm water runoff is eroding the banks, water must be diverted to an area where soil in less likely to be disturbed. Additionally, the municipality also put several “general guidelines” into effect for all areas in the municipality, whether the areas were labeled “at-risk” or not.

The Grand Falls Erosion Assessment Project is still under review and the best adaptive measures are still being contemplated. Some possible measures include general guidelines including a ban of any discharge storm water drains over soil banks. This general ban would also forbid: removal of vegetation on the soil banks; accumulation of snow on the banks or pushing of snow over the banks; and filling of any kind along the slopes. Furthermore, every new commercial or residential development within the town is could be required to submit a detailed storm water management plan before its approval to build is issued. That way, the town would be assured that no new development projects would create additional stress on the water system. Another common approach to adapting to climate change contemplated by the municipality is the idea of “retreat.” Under a retreat plan, the town would gradually move current and future development away from the affected area through denying permits. The town would implement a policy that requires every new structure near the affected areas to be set back a minimum distance from the banks.

The Grand Falls Erosion Assessment Project is expected to generate important policy changes in the municipality. For instance, the risk zones identified in the study will potentially be incorporated into the up-coming 5-year Town Plan. Furthermore, a general policy is being pushed to encourage homes built on sedimentary rock to seek a geological opinion about possible construction issues before allowing a permit.
However, the town will continue to face its greatest challenge (funding) on the provincial level. The Province of New Brunswick has historically been able to buy homes and businesses out of high-risk erosion areas through disaster relief funds; but as climate change issues increase, these funds will be far more difficult to rely on. Grand Falls will utilize the Assessment Project and proposed amendments to the municipal development for the purpose of establishing a business plan. This business plan will be used to support various funding applications associated with a particular issue requiring remediation and/or the application of a specific adaptation solution.